Close
Welcome to U2 Graphics! We are ready for takeoff.
Home / News / MQ-25 "Stingray" (CBARS)

The Boeing MQ-25 Stingray is a jet-powered, Group 5 unmanned aerial vehicle (UAV) which will perform aerial refueling missions for the U.S. Navy (USN). The aircraft will have a secondary role as an ISR platform – using a Raytheon supplied EO/IR system. The Stingray is powered by a single Rolls Royce AE 3007N turbofan engine that produces more than 10,000 lbs. of thrust. The Stingray is expected to enter operational service in 2025 with a projected flyaway cost of approximately $120 million.

In December 2002, the DoD consolidated the Air Force’s separate UCAV program with the UCAV-N to form the Joint Unmanned Combat Air Systems (J-UCAS) program. The J-UCAS would perform strike, ISR, EW and SEAD missions. Expanding mission requirements drove the initial low-cost concept to a 90,000 lbs. class maximum takeoff weight (MTOW) UCAV. The 2006 Quadrennial Defense Review (QDR) canceled J-UCAS and instructed the Air Force to develop a new bomber and the Navy to acquire a long-range UAV to expand the reach of U.S. carrier groups. The resulting Navy Unmanned Combat Air System (N-UCAS) shared many of the basic desired capabilities of the J-UCAS concept.

As part of the N-UCAS program, the Navy began the Unmanned Combat Air System Demonstration (UCAS-D) program to validate carrier UAV technologies and operations. In August 2007, the USN awarded Northrop Grumman a $635 million ($778 million in 2019 dollars) contract to develop the X-47B under UCAS-D. On February 4, 2011, the X-47B completed its first flight, and carrier tests took place in 2013. The Unmanned Carrier Launched Airborne Surveillance and Strike (UCLASS) was launched in 2011 with the aim to translate lessons learned from UCAS-D into an operational platform. In June 2011, the Joint Requirements Oversight Council (JROC) issued the UCLASS initial operational capabilities document (JROC 087-11) which detailed a survivable, long endurance, ISR and precision strike platform. However, the JROC rescoped the program in December 2012 with 086-12 and 196-12. The new requirements downgraded the survivability specification; the new platform would instead provide ISR and strike capabilities in permissive environments. Payload requirements dropped from 6,000 lbs. to 1,000 lbs. In April 2013, the USN approved of the aforementioned UCLASS requirements but added aerial refueling as a growth capability. The UCLASS Request for Proposals (RFP) was released in April 2014. 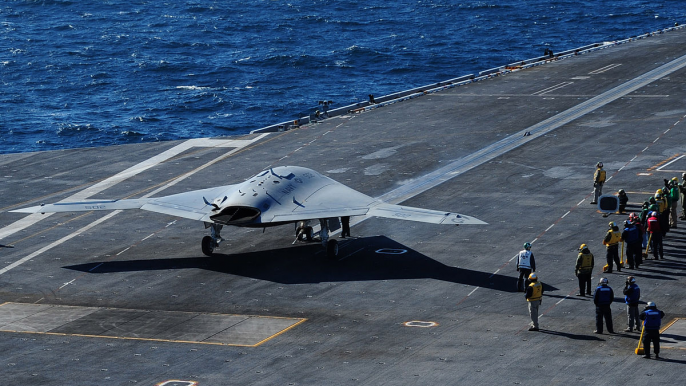 A key requirement for the 2014 UCLASS concept was an unrefueled endurance of 14 hours to provide the carrier group with continuous ISR orbits. The USN argued that a more affordable initial design geared toward the ISR mission could be modified over time to perform more demanding missions. Several members of Congress were deeply critical of the USN’s amended UCLASS concept and sought a long-range, low observable, strike platform. The shift toward a tanker from an ISR program began in 2015. In August 2015, the JROC examined Next Generation Air Dominance requirements, which included carrier-based aerial refueling tankers to replace the Super Hornet. As early as March 2000, the USN had identified its need for a carrier based refueling asset to support its Super Hornets. In early 2016, then Deputy Secretary of Defense Robert Work led an Office of the Secretary of Defense review on all ongoing DoD UAV ISR programs. The review led to the Carrier Based Aerial Refueling System (CBARS) program which effectively superseded UCLASS. In a mission tanking role, the new UAV would be able to deliver 15,000 lbs. of fuel to carrier aircraft operating 500 nautical miles from the strike group. For reference, a F/A-18E can carry 14,500 lbs. of fuel internally and an F-35C can carry 19,750 lbs. of fuel internally. In August 2017, Vice Adm. Shoemaker remarked that MQ-25s will be able to support four to six fighters at range during a mission tanking assignments. Some MQ-25s will also operate closer to the carrier to perform recovery tanking– refueling aircraft waiting to land on the carrier.

The decision to shift UCLASS to CBARS was made in conjunction with procuring additional Super Hornets and accelerating F-35C procurement. In February 2016, CNO Adm. Richardson explained the new tanker will free up between five and six Super Hornets per airwing which regularly perform tanking missions. In Congressional testimony in February 2016, USN officials referred to the aircraft as the RAQ-25 Stingray, RAQ defined as a reconnaissance and unmanned attack vehicle. The USN had subsequently revised the aircraft’s designation to the MQ-25A Stingray by March 2016, MQ defined as a multi-mission unmanned vehicle. The USN considered the MQ designation more representative of the aircraft’s capabilities.

In October 2017, the USN released its final RFP to General Atomics, Northrop Grumman, Boeing and Lockheed Martin. Northrop Grumman withdrew from the competition later that month. Analysts believe the X-47B’s low observable, cranked kite design suited earlier iterations of UCLASS concept, but was not competitive against more conventional, fuel-efficient, wing-body-tail designs such as those offered by Boeing and General Atomics. Lockheed Martin offered its Sea Ghost, a flying-wing design.

On August 30, 2018, the USN awarded Boeing a $805.2 million Engineering Manufacturing Development (EMD) contract for four MQ-25A aircraft. Multiple analysts concluded Boeing leveraged its commercial businesses to offer a lower fixed-price bid than any of its competitors could sustain, i.e. Boeing would be responsible for any cost overruns, but they could sustain short-term losses given their commercial business portfolio. Furthermore, Boeing’s larger purchasing power affords the company advantages when negotiating with suppliers. Boeing’s pricing strategy was reportedly used for its successful MQ-25, T-X and MH-139 bids, all awarded during the fall of 2018. 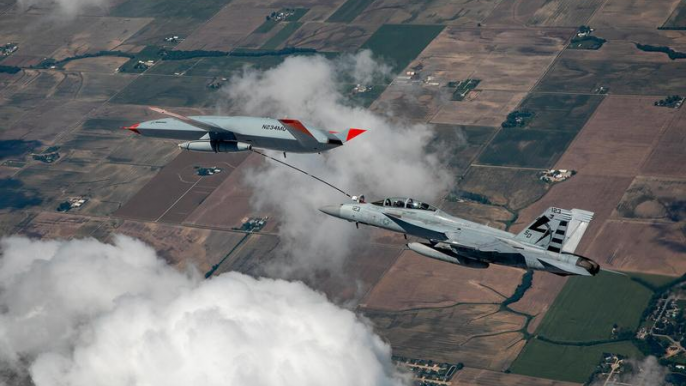 MQ-25 T1 demonstrator refueling an F/A-18E for the first time in June 2021. With the Navy removing conformal fuel tanks (CFTs) from the Block III configuration – which added 3,500 lbs. of additional fuel expanding Super Hornet’s combat radius from 509 nm to 611 nm in an air-to-air loadout, the F/A-18E fleet will become increasingly dependent upon the MQ-25. The Navy has not provided further details explaining the CFT issue aside from safety. Boeing maintains it will still be able to offer CFT’s for land-based operators. The addition of CFTs may have altered the Block III’s center of gravity with respect to catapult recovery which has historically been a limiting factor affecting upgrades to carrier borne aircraft.

Boeing began work on its T1 UCLASS demonstrator in 2012. The T1 design shares many low features from the Tacit Blue low-observability technology demonstrator built by Northrop in the early 1980s. For example, the T1 shares a top-mounted flush inlet, unswept wings and V-tails. The T1 also includes a retractable arrestor hook and chine line around the center fuselage. The T1 design shares broad similarities to Lockheed Martin’s MRE-C04 concept from 2000, such as the strait wing and V-tail arrangement, but the MRE-C04’s engine inlet was mounted on top of the fuselage. In a tanking configuration, the MQ-25 will be equipped with two Cobham 330-gallon fuel tanks mounted on external wing pylons as well as an EO/IR turret– all these features will increase the aircraft’s radar cross section. The MQ-25A has a length of 51 feet, a wingspan of 75 feet and a width of 31.3 feet when its wings are folded in a carrier stowage configuration.

The USN had planned incremental upgrades to UCLASS under the prior requirements for a permissive ISR and strike aircraft. Future capabilities are expected for the MQ-25A, but the USN has not released a substantial MQ-25A upgrade roadmap at the time of this writing. As the sea surface pivots towards an era of great power competition, the survivability of much of its existing aviation assets – such as the P-8, MQ-4, etc., remain in jeopardy.

A total of four EMD and three additional System Demonstration Test Articles (SDTAs) will be procured to support development of the aircraft and its mission systems. Boeing’s existing prototype will validate technologies during the EMD phase, but the aircraft is not classified as an EMD asset toward the procurement program. As of March 2019, a total of 69 production aircraft are planned for a total 76 aircraft. Prior reporting indicated a program of record of 72 aircraft. The Primary Authorized Aircraft fleet will consist of 47 aircraft which will support eight carrier airwings with five aircraft each, and one Forward Deployed Naval Force (FDNF) with seven aircraft. The first two deployable squadrons are unmanned Carrier Launched Multirole Squadron (VUQ) 11 and 12. The USS Dwight D. Eisenhower (CVN-69) and USS George H.W. Bush (CVN-77) will be the first two carriers to receive MQ-25As.